Xi replies to letter from medical students of Tibet University 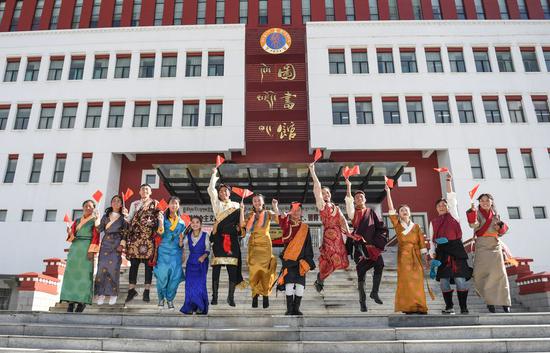 Students perform during an event to celebrate the 70th anniversary of the founding of the People's Republic of China at Tibet University in Lhasa, capital of southwest China's Tibet Autonomous Region, Sept. 12, 2019. (Xinhua/Jigme Dorje)

President Xi Jinping has encouraged medical students of Tibet University to develop strong skills and serve the people at the primary level ahead of the Tibetan New Year.

Xi, also general secretary of the Communist Party of China Central Committee and chairman of the Central Military Commission, made the remarks Friday when answering a letter from 17 students who are interning at Peking University Shougang Hospital in Beijing.

He also extended festive greetings and best wishes to the students as well as the people of all ethnic groups living in Tibetan areas.

Xi said that he was very gratified to learn that the 17 students have not only improved their basic clinical skills but also strengthened their belief in devoting themselves to Tibet's medical and health undertakings during their internship in Beijing.

In the ongoing fight against the novel coronavirus, medical workers from military and local hospitals are fighting fearlessly on the frontline and have exemplified angels in white's lofty spirit of healing the wounded and rescuing the dying with their actions.

"I believe you will follow their example and strive to become good doctors trusted by the Party and the people," said Xi in the reply letter, expressing the hope that the students will cherish their study time, sharpen their ability, go to places where they are most needed after graduation and work for the wellbeing of the people, particularly those at the primary level.

The 17 students enrolled in clinical medicine at the School of Medicine of Tibet University in 2015 began their 11-month internship at the Peking University Shougang Hospital in June 2019 under a university aid project.

In a recent letter to Xi, the students reported on their attainments during the internship and expressed their gratitude to the Party and the country, and their resolution to serve the motherland and contribute to their hometown.